Wellington has always been a scenic city with it's large harbour providing many beautiful views and a hive of activity as ships ply their way in and out. Few suburbs have a better view of this than that of Oriental Parade. Tucked down close to the shoreline and behind a hill it's predominantly East facing gives it excellent afternoon sun while also being quite sheltered from the weather if not the harbour water. It's always been pretty so that when I first bought a camera, a little Olympus Superzoom 100 point and shoot, that one of the first places I took a photograph of was the fountain in the water off Oriental Parade. 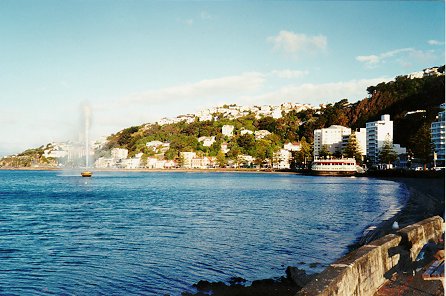 This was something like the fifth photograph I took and one of the more successful ones off the first roll of film. Given that it has always been a beautiful spot you can perhaps understand why I thought it a little odd that the City Council announced a plan a year back to put in an artificial beach to enhance the parade. After all the parade itself resulted more from a need to build a sea wall than any great desire for one. I had wondered how they were going to keep the sand there because the scouring action of the waves is quite fierce along the seafront. It almost seemed a massive waste of public funds.

Happily, having now seen the completed beach, I can safely say I was wrong. It opened on a fine, if still early spring to late winter chilly, Sunday afternoon in October and Mum & I took a quick look at it on the opening day. Compare for yourself the difference with this next shot that shows roughly the same view as my previous one.

The beach has made a dramatic difference with not only providing more public space for people to enjoy the views but the sand has boosted the level of reflected light amazingly, lifting the feel of the parade from being merely pleasant to an almost tropical feel. Perhaps the nicest touch is that it isn't just the people getting the benefit with seagulls and other wildlife appearing on the or near the beach as well. Indeed this was the opening day of the beach and not only were the seagulls quick to try it but we had a seal in the harbour working it's way along the new beachfront catching fish.

Most sensibly the seagulls weren't letting people get near them without a close inspection first. It is nice to see the local wildlife out and about more - with the Kaori birdlife sanctuary giving many native species of bird a good starting point to venture out over the city. Although none were on the beach that I noticed when taking these.

The function of this building has changed over the years from it's original band rotunda purpose. Now featuring a restaurant on the top level and a community meeting space below. On a calm night it is a pleasure to attend a meeting there because it affords a good excuse to walk along the parade at a time when the number of people is reduced a bit.

Even better of course is picking a pleasant day and walking near the base of the Rotunda with the water lapping around your feet. Of course this does suffer from the problem of the occasional looney photographer wanting to photograph your feet. From the wary looks I got I suspect the owner of feet is convinced I am mad and that there isn't anything worth shooting here. Or perhaps they were just trying to be considerate and not enter the shot. Either way it is one of the better images I gleaned from the day.

It isn't just the parade itself that is interesting. This is one of the older suburbs in Wellington and the residents have managed to keep a number of colonial style buildings in good order. Such as this one set dramatically on the hillside in amongst the trees.

Not to mention Carter Fountain here, in the bay itself. For years I have seen this fountain and watched for the days when it is active and spraying water but in all that time I never knew what it was called. It wasn't till I was doing some cursory research for this web page that I discovered it was called Carter Fountain. Presumably after the same Carter whose name graces the Carter Observatory, home of the National Observatory up above the Botanic Gardens in Kelburn. As can be seen from the first photograph on this page when the fountain is active it is a most impressive and pleasant sight.

Also common are yachts coming into the marina close to Te Papa, or the new National Museum - curiously located on reclaimed land at the waterfront in an earthquake prone region. The yachts are nearly always plying in and out on the weekends with the summer months often seeing a race around segments of the harbour going on. A fleet of twenty or so yachts going at full sail is always interesting to watch especially with the jockying for position and clean air that goes on.

Of course there is always the water to keep your interest too. The beach provides a nice gentle gradient into the water so you get, even on moderately sunny days like the one I took these, interesting plays of light and colour with the water. I have been using this next shot as a desktop background on my work and home computers, something it is really quite good at.

This second shot just shows the fascinating interplay of light and shadow in shallow water. It helps that the sand itself is quite unusual. Taken from the Nelson region it is almost iron sand and has a much larger and coarser grain to it than the local beaches (like in Island Bay or up Kapiti Coast way) do. As I understand this isn't the originally planned sand, the first load brought across was a lighter grain and the water currents just scoured it away almost as fast as it was placed.

The one caveat still remaining with the beach is that it does get entirely covered over at high tide. As a result if you want to actually walk on it then timing is an issue. I am glad the council spent tax dollars doing this - all in all the total project cost NZ$7.5 million which included the shifting in of twenty two thousand tons (metric) of Golden Bay sand along with an extensive program of stormwater plus roading improvements along the whole parade and a submerged reef just north east of the band rotunda to ease the scouring motion of the normal harbour currents. Even with all this work there is still going to be supplemental work pulling sand back and occasional top ups but it all seems worth it.